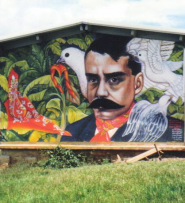 “I’ve returned realizing that there is a better world out there than the one we are currently living in... “This is a comment from Bill Wilen, a participant in the Center's February 2017 delegation to San Cristobal de las Casas.

23 years after the Zapatista uprising in Chiapas and despite constant attempts by the Mexican government to undermine their project, the people of Chiapas have been able to keep the government at bay and to maintain impressive developments in participatory community development. The 1994 uprising, timed to coincide with the introduction of NAFTA, fought for land and other rights, including the right to grow their own food for their families in the traditional ways without interference from the government. They were particularly opposed to the take-over of their land for the corporate cultivation of corn and other crops for export, with little or none left for local people.

In these dark times, when our governments seem hopelessly dysfunctional, visiting places where people are working on alternatives can be especially encouraging. So far this year, the Center has organized two delegations to Chiapas with a third "Day of the Dead" trip projected for late October. We are also organizing trips to Cuba focusing on the developing cooperative movement there, as well to the amazingly beautiful ejido cooperative resort, Grutas de Tolantongo.

The February Chiapas delegation visited numerous indigenous communities—including Charmula, Zinacantan and Oventic where they were able to meet with community groups developing ecological agriculture, cooperatives, organic markets, community schools and museums, as well as a new botanical garden just outside of San Cristobal. They even took a Sumidero Canyon boat excursion which, according to Bill, “was an amazing adventure.”

Bill went on to describe their visit to a  Zapatista school that operates without any governent support: “The school invites any student, of any age, from any indigenous community, and any Zapatista cooperative, to learn a trade skill in addition to reading and writing. Some of the 400 students live in dorms or commute from near and far away, including Guatamala... We visited many “vocational” classrooms and saw students learning and practicing different skills of their choice. Students are encouraged to return to their communities and to teach their newly learned skills. Many of the teachers are alumni...”

The group also learned about the challenges they face--including continuing threats from para-military units that are being trained by the Mexican government. The government also attempts to claim rights to any metals found under the soil regardless of property ownership. Mary Reinsmoen, another delegation member, told us that  “government officials have gradually been moving in again, offering incentives to gain mining rights...” She noted that they are also trying to gain access to indigenous lands for industrial farming. These tempting incentives include needed funds for better schools, better roads and other improvements.

This Fall, the Center for Global Justice is planning a "Day of the Dead " educational travel group to Chiapas. From October 29th to November 5th, a group of no more than 10 will experience the blend of indigenous and catholic ritual that is entwined in this regions honoring of those that have passed. It promises to be a very memorable few days filled with incredible beauty and traditions unique to the region. From our base in San Cristobal de las Casas, a town of European flavor, the group will also visit several indigenous communities, each with its own language, dress and customs. In this state of geographically and historically distinct communities, there are some 11 different languages spoken. And of great importance, this is the area that gave birth to and continues to nurture the Zapatista's, a movement that inspires many in the reality that another world is not only possible, but is being practiced successfully in everyday life here in Chiapas.

Contact Olivia at the Center office--admin@globaljusticecenter.org-- if you are interested in participating  in this delegation: Oct 29 - Nov 5th. We'll email the detailed itinerary and pricing to you.